Up next is another pinstriped hybrid jersey very similar to the Sea Kings jersey.  This time it’s a beautiful green pinstripe polyester fabric, with unbleached cotton canvas arm insets laced in with jute twine.  This was designed as another hockey jersey, but I think you could argue it’s just a baseball jersey.  Many had detachable sleeves and a short henley-like front during different eras.

The most notable feature is the zip-up collar that incorporates the zipper as the whale’s mouth.  Since this resembles teeth more than baleen, I made the whale look kind of like a sperm whale, so the team name makes sense.  The entire reason for this jersey’s existence is I wanted a zipper smile, everything else on this is pretty much filler.

Because the tail swings to one side, I placed the diamond TW logo to the lower right to balance it out.  The diamond is similar to many emblems seen on baseball jerseys in the flannel era, but also reminds me of corporate logos from the ’50s and ’60s, like some kind of chemical company or something.

There’s something joyous about the whale, like he’s breaching out of pure happiness.  And, of course, he’s smiling.

Here’s the back, not sure why I opted for a basic 1 as I normally like something more interesting, but maybe I was feeling lazy that day, or maybe the zipper was enough. 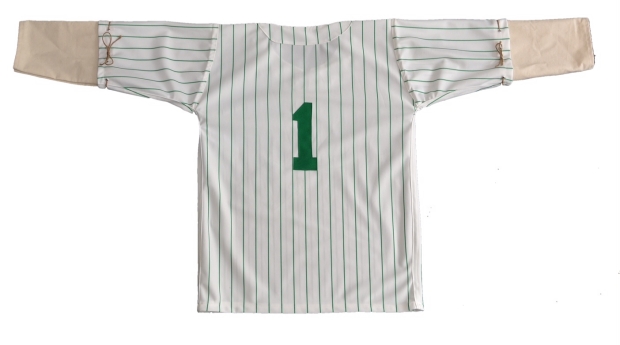 Speaking of lazy, I should really take some close-ups of the zipper, but the jersey is downstairs in storage somewhere so I don’t have it handy to take a picture.  I really should, as I did a pretty good job of matching the pinstripes on the collar to those on the body.

As an additional fun detail, the whale’s eye is a grommet, same as the ones on the sleeves.

One thought on “Toothed Whales Jersey”